With first movie not yet out yet I was a little reluctant to post this but hey why not the feedback from movie one has been so good so if you’ve been lucky to see the movie be it at a festival below is a little taster of the next installment. The 3 movies (The Girl who kicked The Hornet’s Nest been the final installment) are based on the books of Swedish author Steig Larsson with the trilogy’s main protaganists been journalist Mikael Blomkvist and the dragon tattoed hacker Lisbeth(Noomi Rapace). Movie one was about there search for a serial killer whilst movie 2 they go more darker underground with focus on Sex traffiking in Sweden and those who target underage girls.

There’s not much about this movie in English at the moment but what I have read is the movie starts exactly where movie one story ends the transition between the 2 seems to go well, engrossing and the leading character do also seem to have good rapport/chemistry when on screen. I havent read the the books but as like any book turn movie I will always see movie first, read book and maybe see movie again.

U.K, Ireland and USA seem to be the only countries left to see movie one as alot of Europe has released movie two with Sweden already released movie 3, but there’s no release date yet for movie and as it seems all 3 movies have been made, there’s a good chance The Girl Who Played With Fire could be out sometime in the summer or late 2010.

imdb synopsis:Mikael Blomkvist, publisher of Millennium magazine, has made his living exposing the crooked and corrupt practices of establishment Swedish figures. So when a young journalist approaches him with a meticulously researched thesis about sex trafficking in Sweden and those in high office who abuse underage girls, Blomkvist immediately throws himself into the investigation

more about “The Girl Who Played With Fire Trailer“, posted with vodpod
POSTER:  Sweden + Denmark 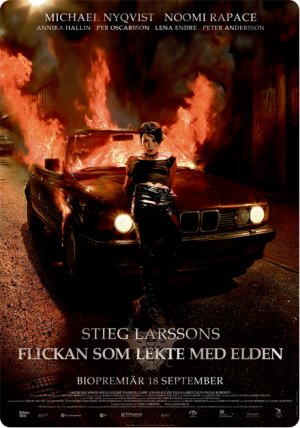 One thought on “The Girl Who Played With Fire Trailer”