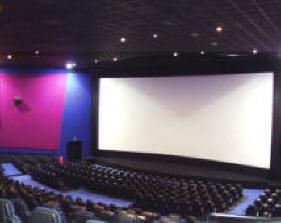 During a recent search through the world wide web I came across a few articles about HMV and Curzon cinema group coming together to create cinema’s which will be created within HMV stores. The wimbledon HMV store will use its unused second floor in the autumn as pilot scheme to try out the idea and if it works HMV and Curzon will open more cinemas within many other locations around UK.

So is combining cinemas with the UK’s biggest DVD seller the way forward for cinema’s in this country during economic struggles? or is just another attempt for the retailers pulling the wool over our eyes get us into there stores, sweet talk us with low prices and once we are happy BANG!! prices go up? END_OF_DOCUMENT_TOKEN_TO_BE_REPLACED

All those little (large) things you hate about the cinema happen here in China. Playing with mobile phones, texting there friends and family every minute, bad ringtones, talking loudly i experienced them all in the first movie. I have to say the other movies there wasnt really much of the mobile phone use happening but it was still annoying. If they where to use the warning messege you get before movies in UK about use of mobile phones, it would be all out war. I would n’t want to be a usher as you would spend more time ejecting people from the screen, the screen would be empty by the end of the movie!!! The cinema would have a new peoples revoultion on their hands. END_OF_DOCUMENT_TOKEN_TO_BE_REPLACED

Most of us are used to going to cinema’s in UK to those big American Style multiplex out  of town cinema with 10 or more screens with all the latest big blockbusters, everything in big scale including the ticket price.

Some people are fortunate to been in a town which still has the old style art deco town centre picturehouse, Ive also experienced cinemas in Greece and Italy too. Many in Greece are big openeair in main holiday resorts, Italy has a mixture of old and new cinemas, recently I got back from China visiting my girlfriend and before I got there she told me she wanted to go to cinema so i got very excited on the prospect of visiting cinemas in another country.

END_OF_DOCUMENT_TOKEN_TO_BE_REPLACED

Saturday afternoons of to the movies to watch another film thats my weekend! Arrive get the student card out, get the tickets then move onto the concessions get some popcorn and coke , walk a few yards give the usher my ticket head off to the screen look for a aisle seat sit down and wait for the trailers. I know im a sucker but i love my trailers and adverts its all part of the excitement of going to the flicks, plus seeing new trailers and what the new orange phone network  advert is going to be. I always sit on an aisle because I can munch and move around easily without annoying anyone.

END_OF_DOCUMENT_TOKEN_TO_BE_REPLACED

Everyone is a sucker for a good orginal film no matter what genre it is. In the 1990’s I admit I wasnt  a big movie goer, but that all changedin 2000 when I moved down to Salford, nr Manchester. I was a 25 year Uni student who wasnt a massive drinker and didnt want to go out to 5-6 every morning so going to the cinema was my fix and since then I have’nt looked back, every friday down to the flicks, but one thing i have noticed and especially the last few years is the amount of remakes that are hitting our big screens.

Go to wikipedia or google list of  film remakes, the list is endless. This decade has been very big for remakes and reading movie mags and websites there’s even more to come.  2004 Zak Synder gave us the legendary Dawn of The dead, the George Romero Zombie classic from 1978, The difference apart from the year the new zombies where more scarier due to they could run, make up is more advanced and of course special fx. The thing about these films both were excllent and actually coplimented each other as they where different as well, the year before Texas Chainsaw Massacare was released and some say was actually better than the orginal (1974). Other films Where Assualt on Precint 13 (1976) remade in 2005 was ok, I Am Legend starring Wil Smith 2007 film based on Charlton Heston’s Omega Man, once again both different but good in there own way.

When it comes to classic films people always say its better to leave it as we left it and dont ruin a films image and there’s been a few remakes that fall under this banner. In 1980 John Carpenter created the scary THE FOG movie, which was full of many brown trouser moments like the dead fisherman rising from the morgue and when I heard they where going to remake it i was very optomistic about this. The remake was made in 2005 and it was utter SHITE, It loosly based itself on the orginal but the directors made the biggest mistake aiming it at the young adult age, trying to give it a modern trendy look with having the guy who plays superman in smallville tv show as lead. Other questionable remakes where Keanu Reeves The Day the Earth Stood Still (2008) which was enjoyable movie with some excellent effects but shit script.

Another type of remake which has been very popular is the Hollywood remake of classic indie/foreign movies. The Ring 1+ 2 Decent films, The Grudge lame versions starring Buffy the Vampire Slayer and more recently Quarantine a remake of the 2007 Spanish Movie [Rec]. The Spanish version is just so scary and brilliant and back in November 2008 I was excited about a Hollywood remake, and I was so dissappointed with its predictable lightweight script.

When I search for stuff to post on my blog i come accross news,trailers of future films it looks like the there’s many more remakes to come. 2009 Bad Liuetenant starring Nicolas Cage in Harvey Kietal’s role, Barbarella that inspired Duran Duran to name their band after a character from the film, and Sci-fi classic When Worlds Collide . Into Next year we have Nightmare On Elm Street, Clash Of The Titans (first ever film I can remember going to the cinema to watch) and folowing year is the Creature From The Black Lagoon, there’s even talk of remaking the Aliens movies with a pre-equal. This seems to be a big thing also these days to bring back on syndicate films and give them a new lease of life. With recent release of Star Trek which has been a massive success, theres going to be talk of many others coming back but there has been many flops. Superman – 2006, Star Wars episodes 1-3 and the list goes on.

Questions msut be asked about the the thinktanks of all the directors, producers of this world, are the creative juices drying up? is orginality dissappearing? Why do we have to look back to look forward? One point for support for remakes is technology which has indeed improved over the decades and remaking a film using new techonolgy could make that film more spectacular but then again look at the last three star wars movies. If a old film is going to be remade or be translated from a foreign language the first question should asked is “will we do the original any justice?” . You must also get the right production team onboard, are he or she very enthusiastic, full of ideas but with full respect for the orginal script?.

There is numerous questions that should be asked, but us moviegoers all we can do is vote with our feet, or follw the hype or simply follow your heart. Personally if theres another opportunity to city in front of a big screen with my popcorn and be transported into another world Ill be there.