Tomorrow evening the world premiere of HARRY POTTER & THE DEATHLY HALLOWS hits London, fingers crossed the reported downpour won’t spoil the exciting red carpet event which is been screened live, and you’ll be able to see here at the site! It All Ends on July 15th for Harry Potter when the last movie in the series finally comes to a cinema near you, but after the surge of recent “It All Ends” posters, we now have 4 more new posters which are all solo efforts; Harry, Hermoine, Ron and ‘The Noseless One’ Voldemort: all looking exhausted in the need of some rest, but the fight must go on!

Not long to go now my potter maniacs, July 15th! If you’re in need of some stimulus remember the previous 7 movies are being screened every day leading up to the big day, so check your local cinema for listings and experience the world’s favourite wizard one last time on the big screen!

HARRY POTTER AND THE DEATHLY HALLOWS PART 2 will be with us from July 15th. 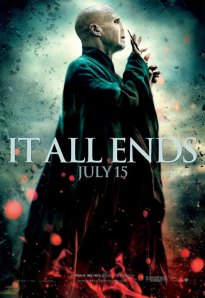