Everyone in the movie website/bloging world has been highly anticipating the release of Takashi Miike’s 13 ASSASSIN’S, which will be released in UK & Ireland on May 6th; that includes everyone at The People’s Movies & Cinehouse and with all the rave reviews we’re hearing, this movie is a must for all fans when it comes out next month. If you’re a fan of world Cinema, especially Asian Cinema, you’ll know Miike has brought us some deranged movies: Audition, Ichi The Killer; you know 13 Assassins will be one heck of a good movie and if you hate movies with subtitles maybe this one will change it for you!

Below is the new UK Qaud Poster from Artifical Eye, who have the privilege of releasing the movie in the UK; plus Ive included the UK trailer as well.

In mid-19th Century Japan the era of the samurai is beginning to fade as the feudal nation begins to enjoy a rare period of peace. But the fragile calm is soon threatened by the bloody rise of Lord Naritsugu, the Shogun’s sadistic, psychopathic younger brother, whose position places him above the law and free to rape, mutilate and murder on a whim. Concerned that Naritsugu’s actions will eventually destroy the Shogunate, top Shogun official Sir Doi covertly calls on esteemed and noble samurai warrior Shinzaemon Shimada to assassinate the evil Lord before it is too late. Shinzaemon willingly agrees and immediately gathers together an elite group of samurai to assist him in the task, knowing that what they are about to embark upon may well prove to be a suicide mission.Following weeks of training and preparation, Shinzaemon and his men head off on a perilous journey through the mountains, hoping to ambush Lord Naritsugu and his entourage. However, on finally coming face to face with their target, the 13 samurai discover Naritsugu’s men hugely outnumber them. Disregarding the odds, the fearless assassins continue with their plan and initiate a bloody showdown that they cannot allow to end until Naritsugu lies dying. 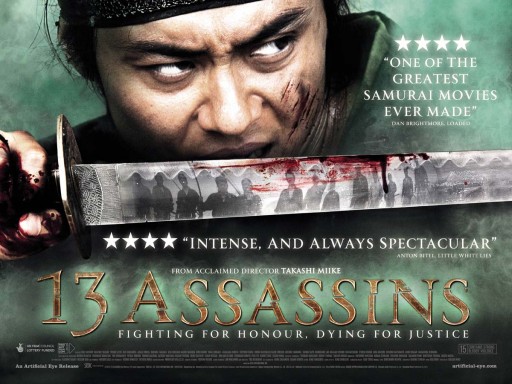