The 11th Belfast Film Festival was launched today by Belfast-born internationally acclaimed director and screen writer, Terry George. 130 films from 25 countries will be screened over the 15 days – commencing on 31st March with the much anticipated

The Festival, which is supported by Northern Ireland Screen, Belfast City Council and Diageo, will showcase the best in local, national and international film-making in14 locations across the city.  From a screening of Whiskey Galore on the River Lagan on 7th April, to the world premiere of George’s latest masterpiece, The Shore, at the QFT on Friday, 1st April, the extravaganza promises to be a sell-out.

Other highlights of the jam-packed programme – which attracted 16,000 visitors to the events last year – include the attendance of the cast and crew at the closing night premiere of Behold the Lamb at the Movie House on the Dublin Road on Thursday, 14th April. This is another local production by Dumbworld Productions and is co-directed by John McElduff, who has worked throughout Europe on various productions.

Two other gala screenings of Matching Jack and TT3D: Closer to the Edge also have a local resonance. James Nesbitt stars in the former as the devoted dad to his nine year old leukaemia ridden son, Jack (Tom Russell), and in the latter, the famous Isle of Mann TT is screened in stunning 3D – with Michael Dunlop featuring. As with all of the events at the Belfast Film Festival this one is worth sitting back and enjoying the ride!

One of the quirky features of the Belfast Film Festival is the locations and venues where movie buffs can view their favourite films. This year is no different with Gentlemen Prefer Blondes being screened on the roof of the Merchant Hotel, some aquatic horror films being shown on the Lagan Boat and the classic Moby Dick in Belfast’s Historic seafaring Church, The Sinclair Seaman’s.

Belfast Film Festival also welcomes home local legend Patricia Quinn to introduce the film that made her a star; The Rocky Horror Picture Show.  And if Horror, Sci-Fi or Fantasy is your cup of tea the Festival has a host of exciting titles on show, including a special horror weekender at the Waterfront with the UK premiere of Whisperer in Darkness and the vampire flick Stake Land. Other genres are also covered, for example martial arts, with 13 Assassins or Gallants appearing on the bill.

In a unique collaboration Belfast Film Festival has teamed up with theatre company Kabosh to produce the world premiere of a new and exciting stage play Raiders of the Lost Story Arc which is based on a meeting in 1978 between George Lucas, Steven Spielberg and Lawrence Kasden. For five days they sit in a room and talk about how to make Indiana Jones work. This is a hilarious and insightful play about how the movies get made and how a classic was born.

In it’s 11th year, the Festival promises to rival other European film festivals of a similar size – and with Northern Ireland quickly developing a reputation as a centre of excellence for film-making – it is only proper that the city should show-case the best of local, national and international talent. This is a view endorsed by George, who, as well as being a patron of the Festival, filmed The Shore on location in Northern Ireland.

Opening the event he said: “It is a tribute to Northern Ireland that the programme contains so much content with local resonance. I 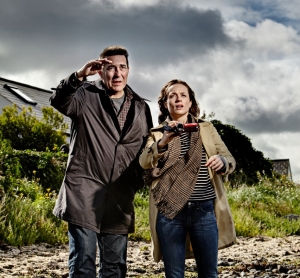 t is a tribute also to the Board and staff of the Belfast Film Festival and their sponsors – Northern Ireland Screen, Belfast City Council and Diageo – that they have developed the Belfast Film Festival, now in its 11th year, into the vibrant and vigorous celebration that it has become .The Festival’s contribution to the cultural and economic life of the region cannot be underestimated.”

Marty McCann echoed these sentiments saying: “Northern Ireland is developing a reputation as a world-class location for film-making. For me it’s still home and to be able to do what I love in the place that I love is extra special. The Belfast Film Festival’s showcasing of a number of premieres, including Killing Bono, is testament to the respect which the Festival is accorded in the industry”.

Discussing the programme in more detail, the Festival’s Chair, Brian Henry Martin commented: “Many genres are covered including documentaries, political dramas, classics and all-time favourites such as The Quiet Man, Gentlemen Prefer Blondes and Casablanca, the saying that “there is something here for everyone” couldn’t be more apt!”

Richard Williams, CEO, Northern Ireland Screen said: “Northern Ireland Screen seeks to provide the people of Northern Ireland with the opportunity to see as wide a range of films as possible, including those made by the wealth of home-grown creative talent.  Through our continued core funding and partnership support for Belfast Film Festival, we can help achieve this goal and make a significant contribution to film culture, education and training.  We are delighted to note the various premieres of Northern Ireland Screen funded productions as part of this year’s festival – Killing Bono; The Shore and Behold the Lamb, as well as the numerous shorts from our up and coming young film-making talent.

Once again, Belfast Film Festival has produced a remarkable programme of screenings and events and we send our sincere good wishes to Michele and her team for another successful festival this year.”

The full programme is available at: