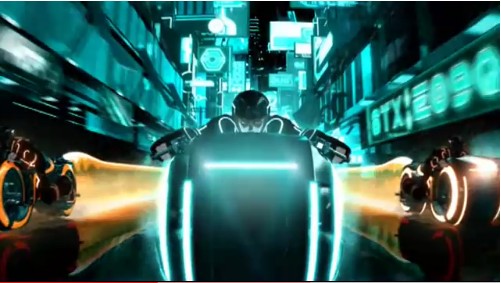 April sees the release of TRON:LEGACY on DVD/BLURAY and today Disney XD channel will air the new Tron Uprising animation series trailer. When Tron Legacy was annouced the whole deal was to launch the Tron Franchise in various platforms which included a animation series, movies sequels,video games and a theme park attraction ride, this animation will take place in a time period between the two movies.

The animation voice cast includes Elijah Wood, Emmanuelle Chriqui, Mandy Moore, Paul Reubens, Nate Corddry, Lance Henriksen and Tron himself Bruce Boxleitner. Tron Uprising is been set for Summer 2012 release but before then in the Autumn there will be a 10 part mini series, these date however are for American audiences no news yet when the British/ Irish release info will be .

Beck, a young program who becomes the unlikely leader of a revolution inside the computer world of The Grid. His mission is to free his home and friends from the reign of the villainous Clu 2 and his henchman General Tesler. Beck will be trained by Tron – the greatest warrior the Grid has ever known. Tron will not only teach Beck the fighting skills he needs to challenge this brutal military occupation, but will be a guide and mentor to him as he grows beyond his youthful, impulsive nature into a courageous, powerful leader. Destined to become the new protector of the system, Beck adopts Tron’s persona and becomes the archenemy of Tesler and his oppressive forces.