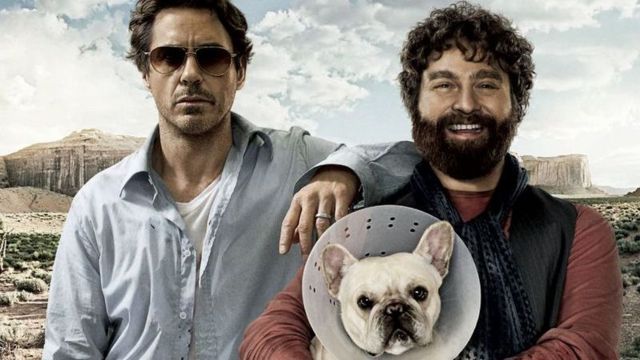 When the trailers as well as the other marketing for DUE DATE came out like probably every blogger, movie website the resemblence to the classic 1987 John Hughes movie Planes, Trains and Automobiles is impossible not to mention.

The classic movie saw Steve Martin and John Candy pair up to be the oddball couple in a road trip from hell as the Martin attempts to be home in time for Christmas in an journey full off slapstick maniac comedy and now 23 years later we Have Due Date with Todd Phillips. In Due Date Robert Downey Jnr plays the determined stubborn businessman trying to get home for the special event and Zach Galifianakis is the John Candy role both with bereavements with the wife becoming the daddy. Right away its mission impossible to avoid any similarities: Road movie, odd couple, slapstick over the top comedy.

Robert Downey Jnr plays Peter Highman  a stuck up arrogant architect trying to get back home to Loas Angeles from Atlanta for the birth of his first child, he’s easily aggitated with every little thing . Now introduce Nathan Trembley played by Zach Galifianakis a aspiring actor heading to Hollywood inspired bt Charlie Sheen’s TV Comedy Two And A Half Men, camp with no self awareness and a killer perm. Through an absurd funny incident on the plane it see’s Highman been tazzered, loss of luggage, id or even money and to top it all off blacklisted from flying on any airline, so through no choice of his he must share a car with the most annoying man in a 2000 journey through hell to get home.

If your a filmmaker like Todd Phillips whose made a cult comedy movie like The Hangover it sometimes can be hard to keep the momentum going into the second movie  though other times that momentum will follow. This movie trys too hard to live off the fact its created by The Hangover creator with the fact it has that John Hughes movie hanging over it which makes it hard to find a true balance of classic humour with gross out humour thus going off track several times. You could also goes as far as saying Nathan Trembley is The Hangover’s Alan Garner reincarnated but dont expect any live tigers in las vegas hotel rooms though!

The casting for the movie wasnt too bad with the best been the two lead actors Robert Downey Jnr perfect as the uptight agitated serious man who can keep a straight face whilst he’s been funny, he is also like a father figure to Zach Galifianakis character the child like adult adolescent  who is just plain stupid with no self awareness but also at times sympathetic. The other co-stars arent in the movie long enough to really be regarded as cameo’s; Juliette Lewis the spaced out drug dealer whose also space cadet boyfriend is played none other than Todd Phillips himself!There was also Danny Mcbride the ex-war vet car hire rep who took no crap from no one, personally Ive never liked him and didnt find him funny though some critics say this was one of the funnier parts. Jamie Foxx is his usual sweet talking smoothster who you think maybe doing the dirty behind Highman’s back  as he was Highman’s wife Michelle Monaghan’s ex-boyfriend, even Ethan attempts to get Highman they are and the only way to find out if they were was at his child’s birth. Michelle Monaghan is underused in this alot like she was inmy opinion in Somehwere with Stephen  Dorff. As for Jamie Foxx’s part or the movie in general what may have helped the movie was to use a Mike Tyson like cameo someone unexpected to beef up the humour level a notch or two.

I have two parts I really loved first up was the scene with the punching of the obnoxious kid something that many adults have probably dreamed of at times when been harrassed by the obnoxious little brats but couldn’t. My all time part was the coffee drinking scene at Jamie Foxx’s house as they all compliment how good the coffee was until they click it was Ethan’s Dads ashes! Like you do when you taste something horrible you drink and Ethan takes another drop of ‘daddy’ until the horror sinks in  he’sdone it again but it was the aftermath whilst Peter and Ethan sit in the car talking about how many cup fulls of coffee his a fathers ashes would make making this the classic scene of the movie.

Due Date was a funny film which does have those brilliant one liners but the humour was let down by the fragmented script as well as the monkey on the back of the sripters not to offend fans of The John Hughes movie with the crudeness of Phillips debut feature. The ironic thing is though Downey Jnr and Galifiankis worked well as the odd couple some of the movies finest moments when the were on their. Due Date isn’t a classic movie like The Hangover but its certainly not a bad movie either just the perfect gap filler as we wait for The Hangover 2 toreturn to the big screen.

2 thoughts on “DVD REVIEW: DUE DATE”