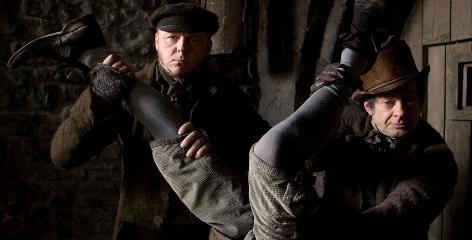 Entertainment Film distributors have unleashed the UK trailer and it has Simon Pegg along Andy Serkis as the gruesome twosome and I do admire these actors and they look the perfect match for this movie, so expectations are high for this movie. You always wonder when movies are made with characters with regional accents you wonder when a director will actually pick actors from that area as both leading actors sound more Irish than east coast Scotland (Im from west coast), Peggs accent nothing like his Star Trek Scotty one which was actually good!

This does look funny does have a little carry on feel, lots of good one liners like – “I had confidence in a fart once, and I shat all over myself!” and a great cast of Isla Fisher, Tim Curry, Tom Wilkinson, Jessica Hynes, Bill Bailey, Stephen Merchant and the one and only Ronnie Corbett (who is from Edinburgh) as the Edinburgh Militia! Of course the other bonus to this movie is its director, the man who brought a certain horror werewolf classic An American Werewolf in London, John Landis finally back behind the lens where he belongs!!!

BUCK AND HARE is due for release this month October 29th in UK & Ireleand, but at this time there is no American distributor just yet. A Big Thanks To our good Friend David at HeyUguys for this trailer!

Love to here your comments below….Based on the true story about the famous murderers, ‘Burke And Hare‘ follows the hapless exploits of these two men as they fall into the highly profitable business of providing cadavers for the medical fraternity in Nineteenth Century Edinburgh, then the centre of medical learning. The one thing they were short of was bodies.- IMDB