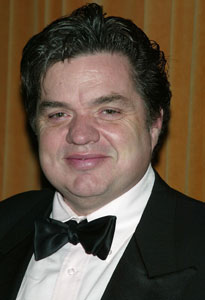 The past two days for X-Men:First Class casting news has been non-stop and it was only a few hours ago I posted that Rosie Byrne was in line to play Moira McTaggert(no mutant) the genetic scientist once lover of Charles Xavier well Deadline are reporting another cast member.

Oliver Platt (2012) is to join the fever increasing cast list as ‘The Man In Black’ not as Johnny Cash (though that would be cool) but an no-mutant character which no details have been given yet. What we can say is the characters still to be filled will be found very shortly  as the movies writer Jane Goldman has told the panel audience at Movie Con that shooting will start in 3 weeks time.

“I think it’s in my contract that I actually get killed if I say much. It’s going really well and I am very excited. I watched a bunch of pre-viz yesterday and went home feeling so excited. We start shooting in about three weeks. We have an incredible cast and we’re all very excited. When I came to visit this set the other day, they’re across Pinewood, and there were X-Men people walking around in bathrobes.” (Comic Book Movie)

When certain movies casting takes  just slightly longer than expected it is good finally know the full cast will be and who they will play and up until now Michael Fassbender, James McAvoy, Caleb Landry Jones, Nicholas Hoult, Kevin Bacon, Jennifer Lawrence, Edi Gathegi, Jason Flemyng and possibly Rose Bryne & Oliver Platt? What people really want to know is what the story will be, I have a hunch that will take a little longer but whatever it’ll be and who else will be in it Ill do my best to cover it here!!!