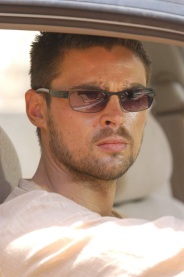 One of the big stories of last months Comic-Con was the rumour that Karl Urban was going to be the new Judge Dredd, every day since the rumour has becoming true and even Urban himself was questioned at Comic-con whilst been interviewed for his next Flick RED. Empire’s Movie-Con had a recent Q&A session with Judge Dredd producers Andrew Macdonald and Allon Reich whom confirmed Karl Urban will be the Law, that’s Judge Dredd!!!

“The main thing about Dredd is that it’s a fantastic comic that was completely messed up 20 years ago,”

“There’s been a change in comic-book movies; they were treated unseriously and now they’re treated seriously. We’ve cast a guy called Karl Urban to play Dredd. We’ll be shooting in Johannesburg, it’s being directed by Pete Travis, we’re shooting with the people who did District 9 – and if we get it right, Alex has a couple of ideas for other stories as well. It’s not based on any one comic, and John Wagner is involved in every decision.”

At first just like many actors taking known characters everyone has some reservations but I just rewatched the whole of the Lord Of The Rings trilogy and the week before Star Trek and Bourne Supremcy and I do think Urban will be a good Joe Dredd especially now that the helmet is to stay on  theyy’ll be alot of happy dredd fans worldwide happier. I was first skeptical of there been a remake of Dredd again after Stallone’s fiasco but sometimes things need another chance to make things right and this is there chance and if they muck it up this time, they should then lay to rest of any further Dredd movies.