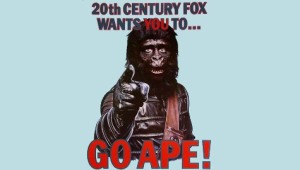 There’s been a few contenders in the past month or two for movies gossip really hoting with casting  X-Men:First Class, Spiderman and RISE OF THE APES and its this movie that a new mew actor has joned the cast. We already have James Franco, Freida Pinto, John Lithgow, Brian Cox and Andy Serkis lined up to star in Rupert Wyatt’s version of the classic simian franchise  and Now  joining the cast is Harry Potter Bad Boy Tom Felton.

The announcement was made via Fox’s Twitter Feed that Felton has joined and will be playing Brian Cox’s on-screen son who joined the cast last week and Cox is playing the nasty Monkey sanctury owner where Franco  & Lithgow’s characters meet Cesar to be (played by Andy Serkis). So now school has broke up and hogwarts is no more when it comes to filming obviously people will be curious to know where the main actors will go to next, well it’s looking evil son number two again for Felton when filming starts this month for a june 24th 2011 USA release date.

Rise of the Apes is a completely new take on one of 20th Century Fox’s most beloved and successful franchises. Oscar-winning visual effects house Weta Digital – employing certain of the groundbreaking technologies developed for Avatar – will render, for the first time ever in the film series, photo-realistic apes rather than costumed actors.

Rise of the Apes is an origin story in the truest sense of the term. Set in present day San Francisco, the film is a reality-based cautionary tale, a science fiction/science fact blend, where man’s own experiments with genetic engineering lead to the development of intelligence in apes and the onset of a war for supremacy.