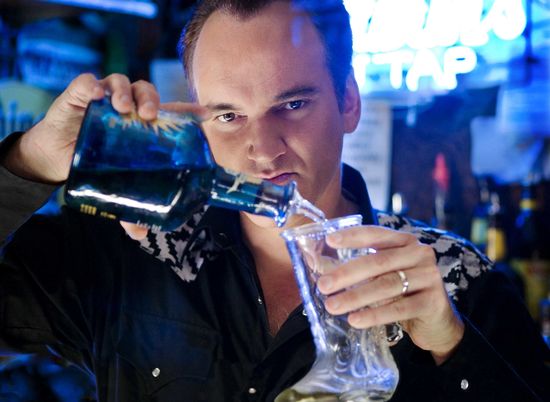 Its been a busy time for Quentin Tarrantino since summer 2009’s The Inglorious Basterds especially with the old oscars only less 4 weeks away on March 7th. Jetting around the world promoting his ‘basterd’ flick any where he can, if they are showing it he’ll promote it big style and during his travels he has talked about his next movie. We know already it wont be Kill Bill Volume 3 as many of you hoped for, but movie which either be a gangster or western movie (with Kill Bill vol 3  possibly the next one after that). We’ve seen Tarantino take on movies with a gangster in it though Im unsure if he was wanting to try the public enemies/ 1930’s gangsters which would an different approach. But you have to say Western’s seem more likely as the genre has been a great inspiration to him  and can be seen in many of his movies so its logical out and out western will be he next movie.

According to the article at First Showing they report that Tarantino has reavealed to NY Daily News his intentions of making a Western and he already has an idea and here’s what he said:

“I’d like to do a Western But rather than set it in Texas, have it in Slavery Times . With that subject that everybody is afraid to deal with. Let’s shine that light on ourselves. You could do a ponderous history lesson of slaves escaping on the Underground Railroad. Or, you could make a movie that would be exciting. Do it as an adventure. A spaghetti Western that takes place during that time. And I would call it ‘ A Southern‘” – taken from First Showing post

Quentin Tarantino is a guy with alot of ideas, some great, some good but may never be possible and it would be interesting to see the above story happening. Im not a western movie fan but done the right way and created in a way that would interest me then I may take note. This isnt the first time he has mentioned he’ll be doing a western, he did that back a few years ago saying he wants to do movie  that deals with America’s horrible past but not movies with big issues, so I think we can say is to be continued.