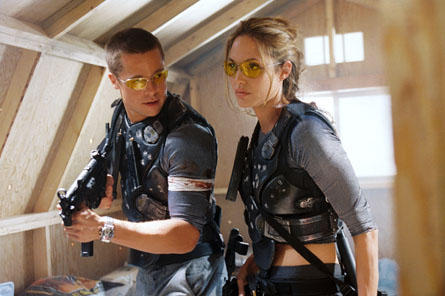 The original was ok (trashy and nice) and the remake wasnt funny  it was terrible but it seems that Mr and Mrs Smith are going to get another reboot.

It seems that someone at Fox does like Mr & Mrs Smith and sees future potiental in it to give the movie another go. When they gave the movie the remake in 2005 Fox had in mind that the movie with having the sex appeal of Brad Pitt and Angelina Jolie it would be a worldwide success which would spin off into a weekly  televison series.

As we all Know this was the movie that kicked off the whole Brangelina aka Mr and Mrs Pitt and this 2005 version didn’t cut the grade with its unfunny lacklustre movie ‘pilot’ but now the aim is to start a fresh with a new couple…Mr and Mrs Jones!

This wont be a sequel to the original but a whole new shebang with a look back at another origin story. Out with The old faces in with the new ones possibly brand new stars who may have not been established as lead roles, like what they did in the recent Star Trek reboot . Akiva Goldsman (I amLegend, Fringe ) has been brought in again to help out even though he produced the 2005 flop, so if you think giving this another chance maybe you should think twice again now.