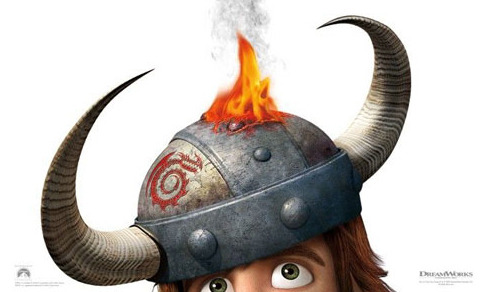 Dreamworks have posted the second full trailer for HOW TO TRAIN YOUR DRAGON online and its below for your viewing pleasure.

Compared to the previous teasers and trailers there is a little more new footage in this trailer especially Gerard Butler’s character plus you get to appreciate the story rather than the dragon just flying and the waste of time telling us what dreamworks has donr in the past.I am however getting a little annoyed that virtually every movie now be it live or animated is now becoming a 3-D, at the beginning it was ok but the past few months it just taking the piss.

Yep technology has advanced but 3-D has been around for a while and as for the current crop movies I would only say one or two (i.e Avatar) merrit watching in 3-d.

How To Train Your Dragon is a tale set in a mythical world where vikings and dragons have been at odds for many decades and slaying dragons is a way of life for vikings. The story does centre around a young boy called Hiccup (Jay Barruchel) who finds a injured dragon and instead of killing it he trains it embarrasing his father (voiced by Gerard Butler).

America Ferrera, craig ferguson and Jonah Hill also loan voices to the movie.Movie comes from the due who brought us Lilo & Stitch, Dean DeBlois and Chris Sanders.

How To Train Your Dragon will be in the British and Irish Cinemas from March 31st 2010.

more about “How to Train Your Dragon Trailer 2“, posted with vodpod