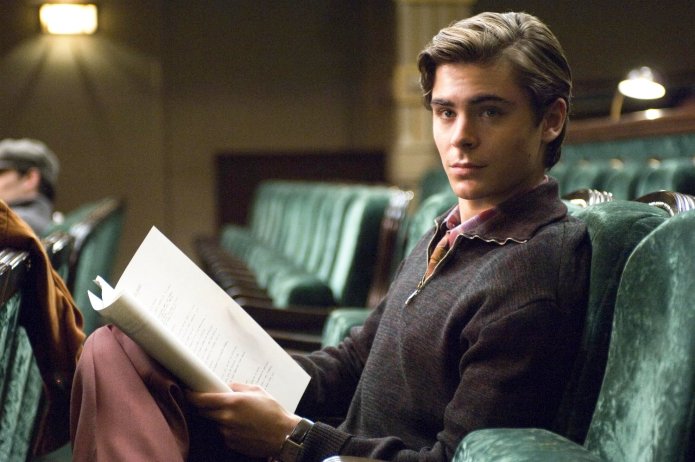 The question many people asked can Zac Efron actually act? or is he another product of high coperate Disney lets get the bucks in with meaningless merchandise? Well the answer is he can actually do a little bit of acting!!!

After many successful years in High School Musical There was signs he would just be anothertypecasted actor to play out his career in similar movies so when Zac was actually going to do Me and Orson Welles alarm bells rang and the critic where ready to aim there crtical knives at him.

I havent seen the movie yet which came out today so I cant comment if its any good but from the clips, trailers and other snippets from the movie it did show zac can act a bit. That I’ll say is good for him so he can the route he wants not what the coperate fat cats want.

Me & Orson Welles is set in New York, 1937: RICHARD SAMUELS (17) is bored with school and dreams of treading the boards on Broadway. After a chance encounter with a theatre company outside a derelict theatre, The Mercury, Richard soon finds himself inside chatting with Orson Welles, the Director of Broadways first Shakespearean production, Julius Caesar. Welles is a bullish, competitive character who is having an affair with the leading lady, MURIEL BRASSLER, despite his wife VIRGINIAS pregnancy. Richard plays on Welles egotistical nature and manages to bluff his way into the role of Lucius; Welles swiftly couples him with the gorgeous production assistant SONJA JONES (20), to rehearse. Richard, along with the rest of the crew, is captivated by Sonjas vivacity and ability to manage everything behind the scenes by schmoozing all the right people. It soon becomes apparent that she is willing to do anything to get her big break. As rehearsals progress Richards total lack of acting ability becomes increasingly apparent and the rest of the company begin to express their concern over the state of the production. However, the wildly flirtatious Orson is too busy conducting radio interviews and seducing young women to take note, whilst Sonja seems more intent on furthering her career and her relationship with Richard. When Orson decides the company would benefit from a team-building game which involves everyone pairing off and going for a drink, Richard cheats to ensure he is paired with Sonja. Their date goes well and after spending the night together Richard declares his love for her at the theatre, the following day. His declaration is met with an indifferent response from Sonja and at the preview matinee she tells him she is to spend the night with Orson. The day of the opening, Richard is distraught to discover that Sonja slept with Orson because he promised to introduce her to Selznick, the producer of Gone With the Wind. After an argument Orson fires Richard and he storms out. Orson finds him on a park bench and apologises and Richard agrees to return to the production. The opening night is a success but its short-lived for Richard as he soon learns that Orsons apology was merely a ruse to ensure a successful first night and Orson has secured a child actor to take over Richards role. To add insult to injury, as Richard sees Sonja waiting outside the Theatre for Selznik to pick her up he learns that Sonja knew of Orsons plan all along. Richards return to normality hits him hard: he tells his family he quit because it didnt pay and he returns to school and decides to pursue a career in writing instead of acting: he has an idea for a novel about a celebrity genius. – IMDB