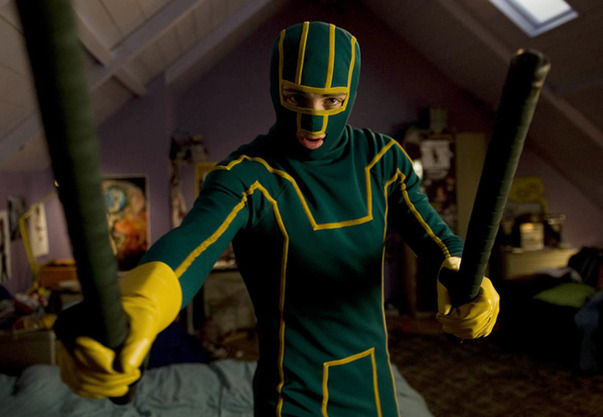 Well it’s 0035hours here in UK and I was about to close down my pc but I decided to have one more look on the internet just in case anything popped up… oh boy what a find! KICK -ASS Teaser trailer is here!!!

Mathew Vaughn’s violent rendition of Mark Millar’s graphic comic book of the same name is here thanks to Firstshowing. According to First Showing the trailer was meant to be released online via myspace (I think) on Friday, if you go to the offical website you’ll see the countdown, but thanks Alex!

Been a fellow scot like Mark Millar several years ago in the 13th Note bar in Glasgow there was a Scottish comic book society for artists, writers amatuer and professional I was a member and I remember Mark and spoke to him as well as Grant Morrison another big artist and only if I knew!!!

Kick Ass will be fantastically brillant and a perfect comicbook to big screen adaptation, Matthew Vaughn’s looks like he’s delivered and I also think this will relight Nicholas Cage’s career as well. If you are like me maybe only know a little about this movie/comicbook or simply nothing, we are in for a big hell of a movie!!!

16 April 2010 is the penciled in release date for USA, no UK date yet but expect similar date , enjoy….

Dave Lizewski is an unnoticed high school student and comic book fan with a few friends and who lives alone with his father. His life is not very difficult and his personal trials not that overwhelming. However, one day he makes the simple decision to become a super-hero even though he has no powers or training. – IMDB