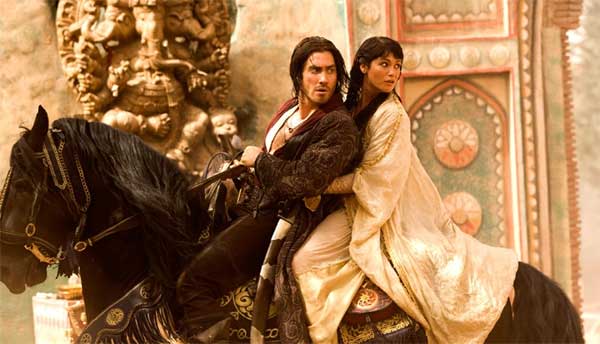 Here’s the first offical Trailer for Disney’s Prince of Persia:Sands Of Time. According to another website this was shown on UK Tv last night though I cant remember seeing it, probably during X Factor results (so that’s Why I never watched it!).

The movie is in a long line of games that come movie franchises, the big question how good is it? Will it be like many other similar Games movies and absolutely flop? possibly. Curiousity Killed the Cat is a saying I like to use here to see how Jerry Bruckheimer and Mike Newell could do with this video game. If it’s so obiviously I like to say but like any movie I will give the benefit of the doubt until I see the movie or more footage before Illl say this is a hit or miss.

Set in medieval Persia, the story of an adventurous prince who teams up with a rival princess to stop an angry ruler from unleashing a sandstorm that could destroy the world. Which is why after the prince was tricked by a dying Vizier to unleash the Sands of Time that turns out to destroy a kingdom and transforms its populace into ferocious demons. In his effort to save his own kingdom and redeem his fatal mistake, it’s up to the prince and the princess to return the sands to the hourglass by using the Dagger of Time, which also gives him a limited control over the flow of time. (source IMDB)

The trailer is courtesy of IGN UK (via Myspace) and Prince Persia will be one of the early Summer 2010 blockbusters with a release date of May 28th, 2010 for UK and Ireland

more about “Prince of Persia : Sands of Time (UK)…“, posted with vodpod