Today a promo trailer for The Expandables blasted its way to The People’s Movies HQ. The trailer looks like a mash up of a number of smaller promos create the sort of trailer which gets pumped out to distrubutors, but the promo does shows the action packed action, guns, violence and a little bit of comedy the movie will have to offer (well we’ll wait and see before judging). 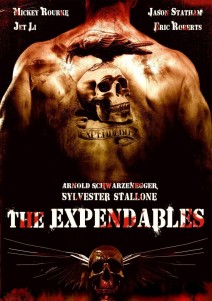 The movie is written and directed by Slyvester stallone and looking at this trailer it pays homage to many great action blockbusters of the 1980’s that Stallone and many of the movies other cast used to appear in so who better to create and star in this movie? The plot is very simple; a group of the world’s best trained and highly dangerous mercenaries go on a deadly mission to overthrow and take out a evil South American dictator who has been causing havoc in pain for over twenty years.

The cast for this movie is very tasty with Jason Statham, Mickey Rourke, Dolph Lundgren, Bruce Willis, Arnold Schwarzenegger (cameo only), Eric Roberts, Jet Li, Terry Crews, (Stone Cold) Steve Austin (hell yeah!!!) and Gary Daniels.What I have found funny is that this movie is been screen tested as a dreaded 12A and 18 movie hopefully the later, I wonder if this is the Wild Geese of the 21st Century? maybe.

We have a long wait until this movie hits the British and Irish screen, expect this time next year as the movie is been lined up for a August 25th 2010 release in USA, so expect more trailers and featurettes, tv spots in the coming months.

One thought on “THE EXPENDABLES: PROMO TRAILER”