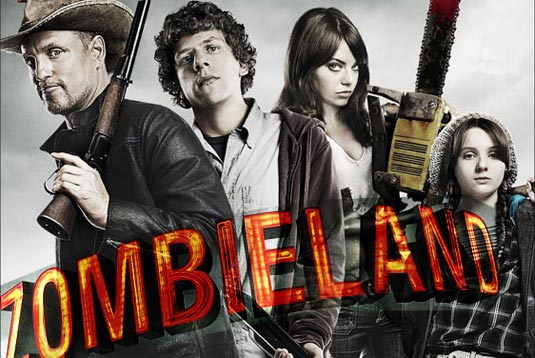 Well there’s no surprise what is the movie of the week, yes ZOMBIELAND!!! You’ve followed the trailers, the featurettes, interviews and the tv spots well its finally arrived! The Movie actually arrived on Wednesday and I think this movie will repeat the success of stateside and before I posted the banner for the movie on front page last week I had around 6 ,500 hits now I have over 11,000!! so to me this will be a popular movie. To many this is America’s very own Shaun of the dead, as if its any better is another story and even if it isnt it doesnt mean its a bad movie.

Well if your a good movie this maybe a bad weekend to be released, well today was menat to be the release of Shutter Island but now thats 19th Feb 2010it wasnt  the main reason for change of date but I think it would have been one of the factors (the main reason due to movie itself). I feel sorry for Up which is finally released in UK & Ireland Zombieland will take some of its viewers (mums and dads) though UP is a family movie. This is also a week for remakes with Rob zombie’s Halloween 2 been released. Also out this week is Le Donk &Scor-Zay-Zee, Katlyn Varga, The Vanishing Of Bees, Goodbye Solo and Love Happens.

Whatever movie you see this week enjoy it and please comeback and leave a review, im really interested in your reviews on zombieland and up.

MOVIE OF THE WEEK: 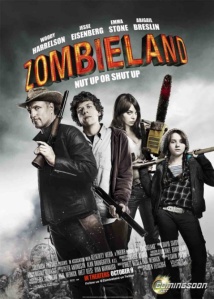 A twerpy college student, masochistic Southern bad-ass and pair of swindling sisters band together as the last survivors of a zombie plague which has ravaged America. Kicking some undead butt on their road-trip across in the post-apocalyptic States, the lonely bunch run into some tricky situations and a familiar face along the way.

A young, shy Carl meets a feisty, adventurous girl named Ellie. Ellie dreams of going to Paradise Falls in South America and makes Carl swear on it, cementing their bond. The two go on to get married, and live and long and happy life together until Ellie dies, leaving Carl with memories and the promise he made her. When he unintentionally hits a construction worker, he is forced to go into a retirement home. However, before they can take him, he and his house fly away with the aid of a million ballons. What Carl doesn’t realise is that there’s an unwanted guest on board – 8 year old Russell, a Wilderness Explorer whose trying to get an assisting the elderly badge, and whom Carl has taken a disliking to. Stuck together, they embark on an adventure in an attempt to realise their individual dreams. 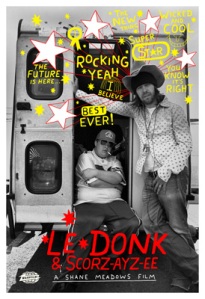 Rock ‘n’ roll roadie Le Donk sees a great opportunity when he spots up-and-coming rapper Scorz-Ayz-Ee, and instantly recognises his potential. Deciding to take the fledgling artist under his wing, and with the help of his ‘friends’, the Arctic Monkeys, so begins Le Donk’s masterplan to make the rapper a star and them both extremely rich.

THE VANISHING OF THE BEES (U)

Vanishing of the Bees explores the mysterious collapse of the bee population across the planet and its greater meaning about mankind’s relationship with the natural world. In addition to studying our reliance on the honeybee as the cornerstone of modern agriculture, the documentary celebrates the ancient relationship between humans and bees. Having filmed throughout the US, Europe and Australia for more than two years, the documentary provides unparalled insight into the tragedy mounting as these crucial pollinators continue to disappear mysteriously and en masse.

A taxi driver tries to convince an old man not to go through with his plans to commit suicide, neglecting his own family as a result.

Michael Myers is back from the dead and has returned to his hometown of Haddonfield, Illinois for a bloody reunion with his sister Laurie, who is in hospital being treated for the wounds he inflicted on her. To get to Laurie, Michael goes on another murderous rampage.

When a self-help author arrives in Seattle to teach a sold-out seminar, he unexpectedly meets the one person who might finally be able to help himself. As each struggles with the hurt of love and loss, they realize that in order to move forward they need to let go of the past. If they can, they will find that , sometimes, love happens when you least expect it.

One thought on “MOVIE OF THE WEEK & OCTOBER 9TH NEW RELEASES”